driving comfort, fuel consumption, and pollutant emissions. The competition of automotive manufacturers and more stringent legislative have imposed continuous improvements of engine characteristics. An efficient and often very economical solution to these improvements includes application of modern control algorithms and devices. The control algorithms mostly rely on the good knowledge of the engine dynamic behavior, which is represented by faithfull, but yet compact mathematical models.

The SI engine dynamic behavior is dominantly determined by the intake manifold thermal transient effects. Hence, the particular attention has been paid on modeling of the manifold dynamics. The standard manifold models usually neglects the temperature changes of the intake manifold air during different engine transients (isothermal assumption). However, some more recent research results have pointed out to significant changes of the manifold air temperature, that have been covered by an adiabatic model (no heat transfer between manifold air and its walls). The both assumptions, isothermal and adiabatic, are limit cases, and a polytropic assumption of state changes would certainly be the more realistic one.

Our research group has been developing lumped-parameters models based on the polytropic assumption. The basic polytropic model developed includes two states (manifold air pressure and temperature) and a variable heat transfer coefficient. It has been extended to a more accurate three-state model, in order to account for possibly different heat transfer characteristics of the plenum and runners. The backflow effect of hot cylinder gasses has been included in the model as well. The research has also covered a comparative algebraic analysis of manifold dynamics for different heat transfer assumptions.

The developed engine models have been validated based on the measurement data obtained on an SI engine experimental setup. Some of the validation results are shown in the below figure.

One of the main applications of the developed model would be estimation and prediction of output manifold air mass flow (or cylinder air charge) for the purpose of effective air/fuel ratio control. A detailed simulation analysis has shown that manifold modeling errors can have a significant influence on the accuracy of air charge estimation and prediction based on the manifold pressure measurement. 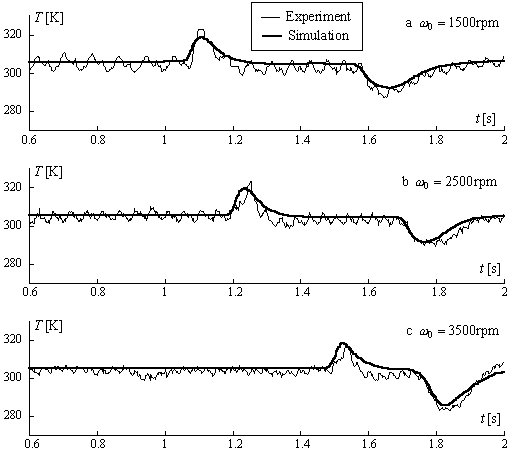